Don't ruin your friendship over politics; even arch-rivals are buddies outside.

Here’s an interesting question for you -

At present, who would qualify for the “fiercest political enemies in India” award?

Yes, you guessed it right. No one can match the level of animosity that exists between Narendra Modi and Mamta Banerjee.

Ever wondered if they can exchange some sweet gestures? Before you say no, you should listen to Narendra Modi’s recent interview with Akshay Kumar, where he said -

Stunned? You should be. Narendra Modi addressed Mamta Banerjee as ‘Didi’ and disclosed how she sends Kurtas and sweets for the Prime Minister 2-3 times every year.

Yet, when they represent their parties on a public platform, they criticise and defame each other openly.

It’s their job…They are paid a hefty amount by the respective parties to degrade the political opponents. Yet, they keep personal relationships intact outside their job.

Then, why do we get over-enthusiastic and fight unnecessarily to damage our friendships and relationships permanently due to political conflicts?

Do the politicians fight outside TV cameras also?

Probably not. At least some of the pictures of women politicians, which went viral last year, show us something else.

You might be amazed to see these pictures since the female politicians are engaged in catfighting and insulting each other on TV. However, they enjoy together when not working.

When Mulayam-Mayawati forgot the grudges for political benefits

In what could be called a “historic day” in Indian politics, Mulayam Singh Yadav from SP and Mayawati from BSP were present on a single stage after nearly 2 decades. 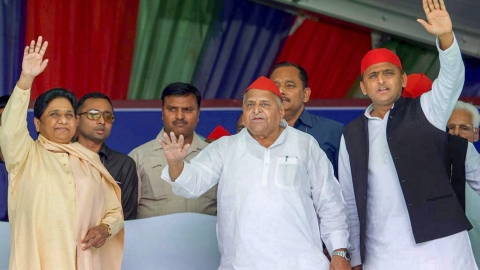 However, to maximise the benefit of Mahagathbandhan, Mulayam and Mayawati buried the grudges and praised each other from one stage during the campaign rally.

What would the supporters, who have filled so much hatredness for the other group, do here?

Can we debate without affecting the friendships?

It is okay to talk passionately about politics and support an ideology or a leader. Also, you may not agree with your friends’ or relatives’ thoughts, which is fine. However, nothing should be taken personally.

Express your thoughts and listen patiently to your friends and family members to indulge in a healthy debate. The moment you realise that the views are bruising egos, pause or stop the discussion rather than fighting aggressively.